Express-o yourself – how latte art works

Legend has it that centuries ago a young herder noticed his goats seemed more energetic after eating berries from a particular tree. The local monks decided to give the berries a go and realized they were much more alert and awake afterwards. Word quickly travelled and coffee culture was born, spreading from the Arabian Peninsula to the rest of the world.

With such a long and rich history, it’s no surprise that we’ve invented a variety of ways to brew and enjoy this timeless drink, from stovetop boiling to overnight cold dripping. Atop the hierarchy of coffee brewing methods sits espresso – that delicious, highly concentrated, full-bodied drink that packs a caffeine punch, and that we’ve all come to rely on to get through the day.

Espresso gave rise to a number of drinks we enjoy today. Lattes, flat whites, cappuccinos, mochas, macchiatos – each has a shot of espresso as its foundation. Aside from differentiating beverages, the introduction of milk to espresso also makes latte art possible. As coffee culture became more sophisticated and the work of baristas regarded as a culinary skill, latte art became an integral element. The designs emphasize the skills and artistry of the barista while making the ritual of coffee drinking more enjoyable for the customer.

Espresso – it’s a machine, it’s a drink, it’s definitely not spelled with an “x”. This method of brewing coffee uses pressurized infusion and dates back to the 1800s in Italy, where it was invented with the purpose of serving coffee immediately. Indeed espresso is the fastest way to brew – the extraction process only takes about 30 seconds and produces (ideally) a strong, concentrated drink with a full body and and a golden layer of foam, called crema, on top.

Espresso is made through a machine that forces nearly boiling water under high pressure through ground coffee that has been compacted into a portafilter. The grind of the coffee has to be quite fine, and a wrongly calibrated grind will be obvious in the look and taste of the final product.

Espresso can be enjoyed as is but it’s also the starting point for many other drinks – created by adding water or milk (or ice cream, chocolate, whipped cream...) to the shot. 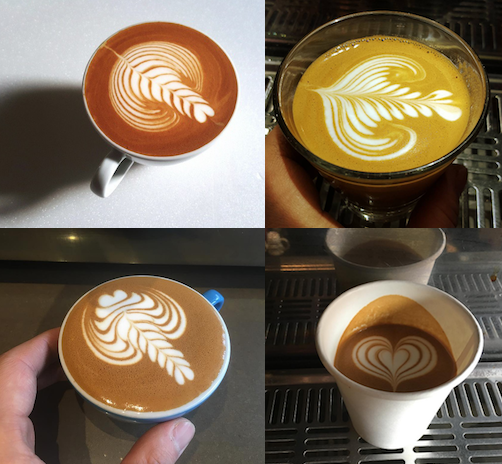 How Latte Art Is Created

For latte art to happen, the espresso shot and and the milk have to be just right. This can make the creation of consistently good latte art difficult for less experienced baristas. It’s a tricky process that requires practice, precision and persistence.

Latte art is a pattern or design created by pouring steamed milk into an espresso shot in a particular way. It can be created through:

For latte art to be a possibility, two conditions have to be met:

The crema acts as the canvas for the art; the designs become possible when the milk breaks through the crema. Once these conditions have been met, latte art is a matter of technique: pouring milk at a steady rate while incorporating a side to side movement of the pitcher. The height and position of the pitcher play an important role, alongside the milk flow and movement control. All these factors influence the symmetry, style and overall quality of the latte art.

What’s The Deal With Latte Art?

In the 1980s David Schomer, a barista from Seattle, ventured to Italy to get some insight into his new profession – having switched from metrology, the science of measurement and a very handy skillset to have in the coffee world!

While no one seems to know where latte art first originated, its prominence in the US is credited to Schomer, who figured out how to replicate the patterns he saw in Italy. Schomer’s Espresso Vivace in Seattle, along with a number of fellow Seattle cafes, really kicked off gourmet coffee culture in the US through the combination of exceptional espresso and intricate latte art.

Of his passion for great coffee, Schomer has said:

“The intent is to promote respect for caffe espresso as a culinary art that emphasizes flavor, a silky feel and stunning presentation possibilities.”

Those presentation possibilities have come a long way from the heart and rosetta patterns that Schomer and the Seattle scene became known for and that we all know as fundamental features of coffee culture today. 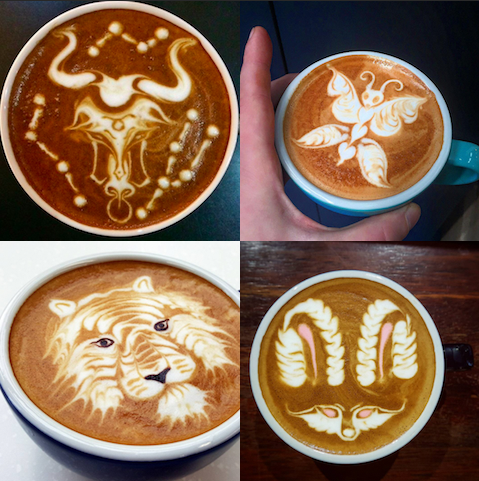 Latte art is the finishing touch on a cup of coffee. The design itself makes no difference to the taste but it influences the drinker’s initial reaction to the beverage. The design should never take precedence over the quality of the coffee and a good barista should be able to get each part of the process right over and over again. These intricate designs disappear quickly, not just because they are gulped up, but because neither the crema nor the microfoam remain stable. The temporary nature of latte art makes it that much more special.

Latte art has become an inextricable part of gourmet coffee culture. There are national and international championships with major prizes, and local throwdowns happen in cafes all around the world.

In these competitions, artistic expression is highlighted in a competitive and demanding setting that challenges the barista not only to create aesthetically pleasing designs but to recreate the pattern as well. While some patterns may be happy accidents, the key is to reproduce the designs repeatedly without sacrificing coffee quality.

Therein lies the challenge of mastering latte art – a good barista needs to get every step of the process right, do it well, and do it repeatedly. Once that’s achieved, artistic expression can flourish and temporary masterpieces can be created from the beautiful combination of crema and microfoam.

Enzo started making coffee while working as a waiter, getting comfortable behind the machine by making staff drinks. Two years later he was in his first barista role at The Hardware Société.

Hailing from France, Enzo says, “I was amazed by the heart and rosetta I saw on lattes.” He tried replicating them with the help of YouTube tutorials and was taught the swan pattern by a fellow Hardware Société barista. It quickly became his favorite pour, alongside the triple swan and the kissing swans.

“There is always room for improvement as you learn new techniques. I’d like to improve my lines game. There are a lot of people I look up to and try to learn from their pours.” He cites Ben Morrow, winner of this year’s Coffee Masters tournament at the London Coffee Festival, as his biggest latte art inspiration. Enzo says the swan pattern is also a customer favorite as it’s something different to the usual heart and rosetta designs.

“I think latte art is the ‘show’ part of the industry. You don’t have to be a connoisseur of coffee to enjoy good art. Of course, it doesn’t matter how pretty your art is if the coffee tastes crap, just like with food.”