Social media contests work on a number of levels. They encourage customers to interact more with your restaurant, and they also quickly boost your fan count, which can be crucial when you’re still trying to establish your business on a slow moving platform like Facebook.

Some competitions work better than others. If a contest isn’t promoted properly it can stagnate and ultimately fail to perform. But if it’s interactive and fun, customers are more likely to participate and spread the word onto their friends.

After taking a look at each of the major social media platforms, I’ve put together a list of the most effective restaurant competitions run in recent years. Try adapting one of these contests for your own restaurant.

This competition is simple, fun and inexpensive. Rashay's Pizza Pasta Grill asks fans to guess the name of an item on the menu for the chance to win a $30 voucher. It has a quick deadline – whoever gets in first wins – and that sense of urgency pulls customers back again and again. The contest also runs daily, which has boosted the page's fan count to over 22,000 people. 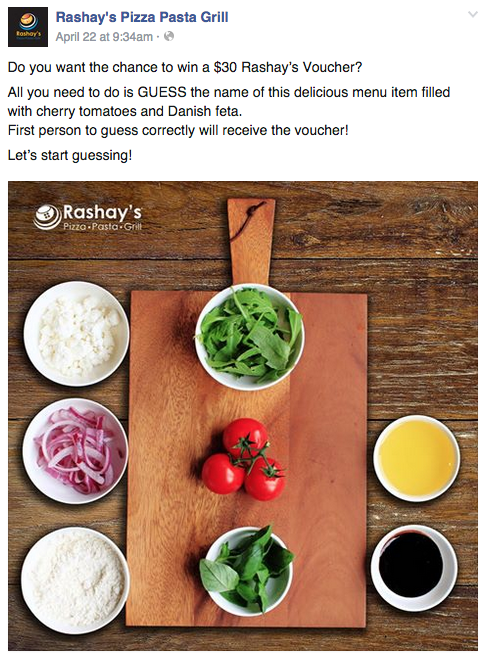 Twitter posts get lost in the chatter very quickly if there isn’t an interactive element at play. To combat this, Zomato ran a campaign called #MyLastMealOnEarth. To enter, you just needed to use the hashtag (which would help them track competition entries), tell them what your last meal would be, and tag the person you wanted to share that meal with.

This had a piggyback effect, because one follower would get their friend involved, who would then spread word onto their friends and so on. Twitter has a 140-character limit, so Zomato posted a picture detailing the full competition rules.

What would your last meal on Earth be? Tweet with the hashtag #MyLastMealOnEarth and win Zomato goodie bags! pic.twitter.com/MS61Qz4TTK

To date, this competition by Comodo is probably one of the most successful on Instagram.

The New York restaurant decided to embrace the fact that people love to Instagram their food. They printed #ComodoMenu on their physical menu and invited guests to upload pictures of their food to Instagram using that hashtag, spreading awareness about their restaurant far and wide.

As a result of the campaign, Comodo found itself booked out for five months straight.

Pin In To Win It

Pinterest contests can be tough, because the platform isn't as interactive as others. But because a majority of its posts are related to recipes, it can be an ideal platform for building stronger relationships with foodies.

Idaho Potato used Pinterest to run a recipe photo contest. Users had to get a recipe off the Idaho Potato website, make the recipe, photograph it, and then pin the photo, using the hashtag #photatocontest.

Because there is some work involved the company ensured there was a strong incentive to enter: the winner received $250. Not only did this encourage users to purchase the product, but it prompted them to talk about the Idaho Potato brand.

Snap For a Coupon

Frozen yoghurt chain 16 Handles ran a very successful Snapchat contest called Snappy New Year. Fans had to take a photo (or ‘snap’) of themselves sampling some frozen yoghurt inside the store, before sending it to the company’s Snapchat account. 16 Handles then sent them back a coupon, which they couldn't open until they were in front of the cashier since Snapchat messages self-destruct in 10 seconds.

The novelty of the promotion went over very well with the platform’s 13-25 year old audience. And because very few businesses use Snapchat as a marketing platform, the chain earned a lot of free publicity. 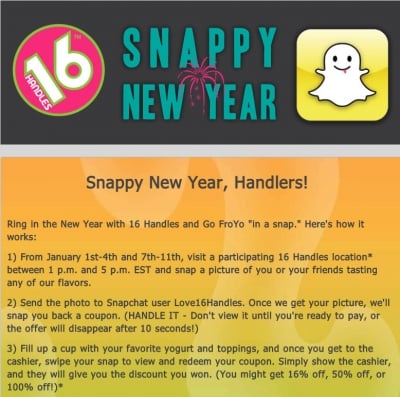