Eau-de-Vie is an award-winning cocktail and whisky bar located in Sydney and Melbourne. It is so good even the cocktail book they put out won an award! The man behind this venue is Sven Almenning.

Following the success of Eau-de-Vie, Sven and The Speakeasy Group he directs have gone on to open The Roosevelt in Sydney and Boilermaker House in Melbourne. A serious entrepreneur and expert in his field, Sven also runs The Experimental Spirits Co, a boutique drinks business for handcrafted, small batch, high quality products.

We talked to Sven to gain some insight into cocktail culture and how he opened the bar he’d been dreaming of for years. 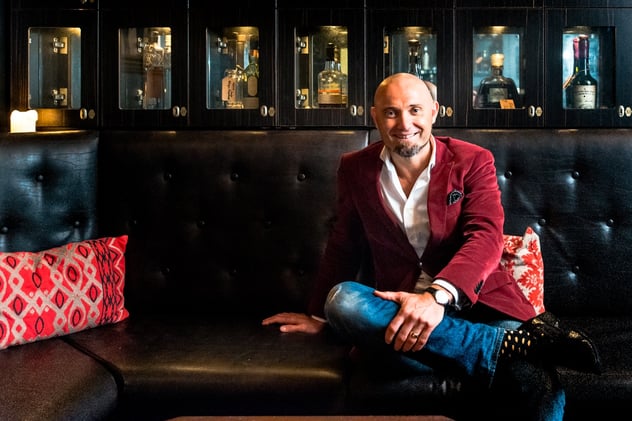 Do you want to start by giving me a little bit of a background on your entry into hospitality and what you have achieved so far?

I used to be a naval officer many years ago and when I left the navy I decided to travel the world. One of the best ways of travelling is to work in bars. I worked in a few different places then in 1996 I did a bar course in the US. After that I travelled around the world and worked as a bartender in Australia, Spain, Norway, the US and a few other places.

I was writing for Bartender Magazine and GQ and I did a lot of articles on bartending for various publications. I think it was 2003 when I decided to set up a business called Behind Bars, which grew to become probably Australia’s, if not the world’s, largest bar industry consultancy group. A big part of what we did there was training bartenders. We trained about 15 000 bartenders a year, face to face, as part of this business.

"We wanted a venue where people come to enjoy what we do."

Then while we had Behind Bars running we were also creating something called World Class, which I think is the largest cocktail competition in the world. We set up the initial framework for that and ran the Australian version of it for many years. The first year we did that we came across the site where Eau-de-Vie is and that’s when we decided to open a bar.

That was six and a half years ago now. Since then we’ve closed down the consultancy business and now we’ve got four bars and we’re kind of expanding into a couple of more.


Did Eau-de-Vie start in Melbourne or Sydney?

It started in Sydney. It went on to win loads of awards and stuff and then I decided with my good friend and staff member at Behind Bars, Greg Sanderson, to open a bar together. We set up Eau-de-Vie in Melbourne which was maybe the smartest thing I’ve done, ever.


You went to bartending school in California. How does the cocktail culture differ between Australia and the US?

America in many ways sets the trends for cocktail culture. Probably primarily because they have such a large market, so what happens in the States I suppose gets more coverage and attention. In many ways we then copy and adopt what happens in America.

But that’s not always the case. We’ve done a few things at Eau-de-Vie over the years that we believe we were the first to do and then 18 months later it kind of emerges as an American trend. In some cases I believe we can also drive trends, you’re just not going to see much recognition for that.

"Eau-de-Vie was always going to be the way it is because that’s the bar we dreamed of opening."

In the States I think people are way more accustomed to drinking cocktails. People have worked cocktails more into their repertoire, they are more likely to make drinks at home. Whereas here, cocktail culture is still an emerging, growing concept. There are very few cocktail bars in Australia that serve predominantly cocktails. You’ll go to many claimed cocktail bars and there will still be lots of beer, lots of wine, lots of mixed drinks, and a few cocktails here and there. Whereas in the States, you’ll see a much higher percentage of cocktails going out across the bar. And it’s got a lot to do with the fact that the consumer is more educated about them.


Would you classify Eau-de-Vie as a whisky bar or more of a cocktail bar?

Definitely a cocktail bar. We’re a cocktail and whisky bar, I suppose. I mean, at Eau-de-Vie, our beer sales are like 1.5% of turnover and our wine sales are about the same. Our cocktail sales are 70% to 80% of our turnover, and whisky sales might be 15%. So we’re definitely cocktails all the way, and then whisky’s our second biggest thing. We have a couple of hundred whiskies in the back bar in Sydney and probably over 400 in Melbourne. So whisky’s a big part of what we do, but cocktails is what people come for.

So going back a little bit, when you first saw the site for Eau-de-Vie, what made you decide it’s going to be a cocktail and whisky bar, as opposed to another type of bar?

I think a lot of people when they open their first bar, the concept is there already, you’ve had the concept forever. So Eau-de-Vie was always going to be the way it is because that’s the bar we dreamed of opening. What was missing was the site. Once we walked into the right site, we were just like “this is where it should be”, and then we kind of took it from there. If we’d walked into the site and it didn’t look like the bar we were dreaming of opening or it didn’t have that feel, then we would’ve waited till we’d found the right place.

Can you recall how the idea for opening a cocktail and whisky bar first started coming about?

As you work in bars and in the industry I think you start creating your dream venue. I wanted a bar where we played kind of low jazz in the background and a bit of funk, and you could have a conversation. People came and cared about the cocktails, cared about the drinks. They came for the drinks, they didn’t come to get pissed, or come because they walked past and could see a bunch of people in there drinking and they wanted to jump in for a quick shot and a beer.

"We don’t serve Bourbon and Coke. You can’t order it, we don’t have it. There are things we won’t do, you know."

We wanted a venue where people come to enjoy what we do. And to create that venue, you need to be hidden. Because otherwise, if you can just walk by then people will roll in with a different idea in mind, you know? People that come to Eau-de-Vie don’t get upset that we don’t have Coke. We don’t serve Bourbon and Coke. You can’t order it, we don’t have it. There are things we won’t do, you know. Because we are a cocktail bar.

So yeah I think for me the idea of the venue had been built for maybe ten years, it was just a matter of finding the space.

The biggest difference is the location, I believe. We’ve done the bars very much the same, we have the exact same cocktail list. But Eau-de-Vie in Melbourne is in the CDB. And with a CDB venue, if it’s done well, you know our Monday night in Melbourne can be enormous. We have a line out the door there pretty much six days a week, every day but Sunday. You have to queue for half an hour to get in. So I think that’s probably the biggest difference, the location, it sort of creates a certain kind of atmosphere. In Sydney it gets cranking on a weekend but it’s a bit more chilled out during the week.

I think I was pretty lucky in how we were able to set things up. I probably wish I’d had a business mentor at some point, someone who came from the background of business, someone who had done forecasting and had dealt with builders, accountants, lawyers and all that stuff. Just someone to give us some business smarts. Because I think a lot of people who set up their own venue come from the industry, come in there without any formal training, and just kind of learn as they go. Which can be very costly and time-consuming.


Is there a piece of advice you would pass on to someone now who is setting up their own venue?

I think one of the things I work towards is... what’s it called? Better done than perfect, I suppose. It’s easy to get caught up in the details, to want everything to be 100%. But nothing is ever going to be 100% so once you’re 80% there, just open a door. Launch your product and then tweak it.